It is expected that CO₂, which cannot be avoided in the industrial process, will be captured from German industrial sites and transported to the planned CO₂nnectNow hub. From there, the CO₂ will first be shipped, later transported via pipeline, from Germany’s only deep-water port to geological formations in the Norwegian and Danish North Sea to be permanently and safely stored. This process is called Carbon Capture and Storage (CCS) and will be key to decarbonising the hard-to-abate-industries in Germany.

HES Wilhelmshaven Tank Terminal was selected as the home for CO₂nnectNow due to its strategic location, deep draft quay, and extensive industrial and rail infrastructure. A study has been launched to determine the feasibility of the project, with its results expected to be received in 2023.

In May 2022, Wintershall Dea, Europe's leading independent gas and oil company, presented BlueHyNow, a planned project to produce large quantities of hydrogen from natural gas in Wilhelmshaven. It is expected that the CO₂ generated by BlueHyNow will also be captured and collected at CO₂nnectNow.

Wintershall Dea has recently announced a partnership with Equinor aiming to connect Germany and Norway via a 900-kilometre CO₂-pipeline. The pipeline is estimated to have an annual capacity of up to 40 million tonnes by 2032 and will enable the safe transportation of CO₂ from the German coast to the Norwegian North Sea.

"Only with CCS, Germany can achieve its climate targets. The North Sea, especially Norway and Denmark, offers enormous potential and Wilhelmshaven is perfectly located in Northern Germany. We are delighted to have found an experienced and locally rooted partner in HES to mature our CO₂nnectNow project," says Klaus Langemann, Senior Vice President Carbon Management & Hydrogen at Wintershall Dea. 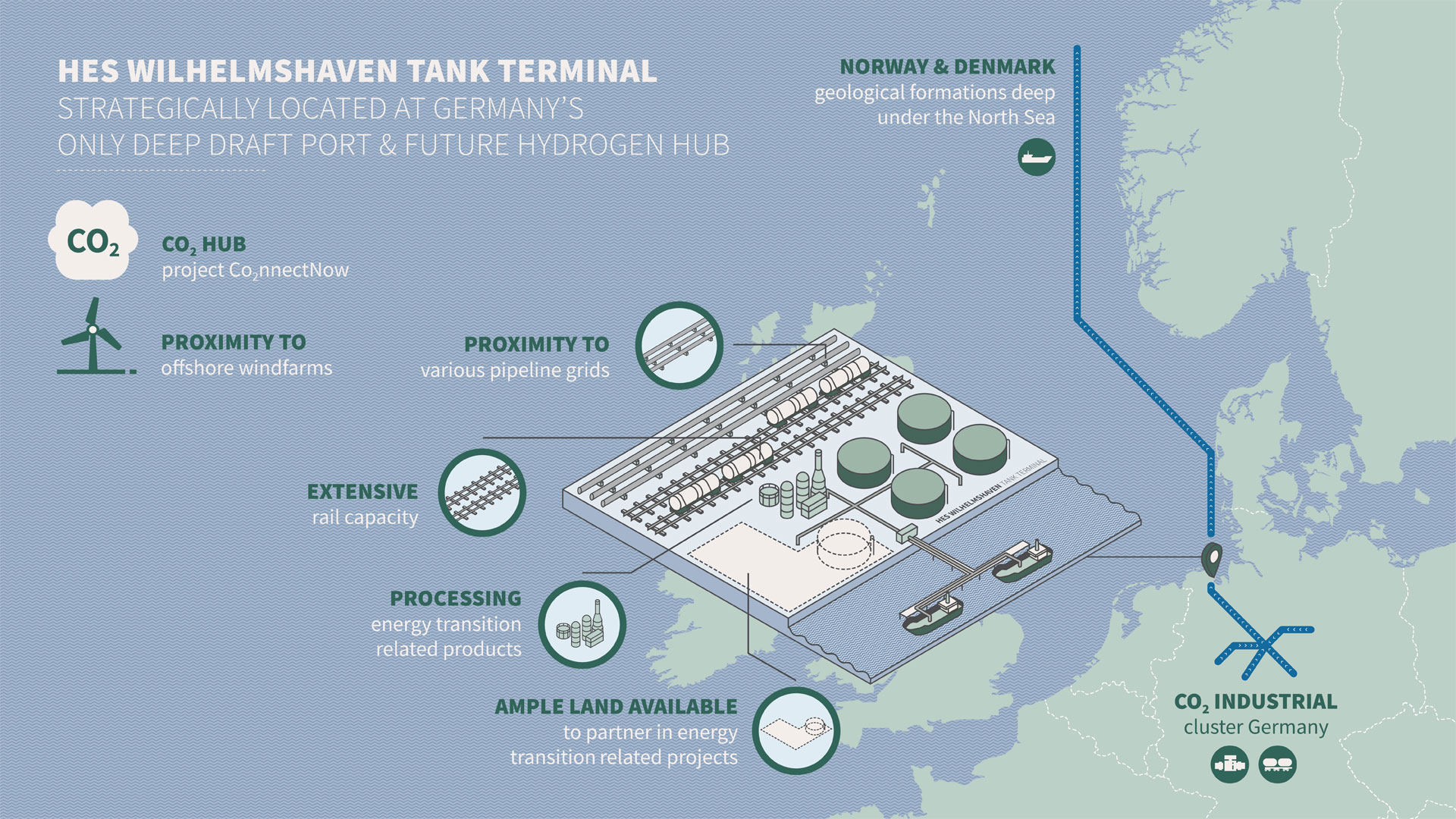 “At HES International, we are pursuing sustainable growth, with a strong focus on opportunities in the energy transition such as hydrogen, CO₂ and clean fuels. Our Wilhelmshaven Tank Terminal has an ambition to play a central role in Northern Germany’s energy transition. The terminal is very well positioned to do so, with ample land available for development, and extensive jetty and rail capacity. Collaboration will be key, if we are to be successful in making a meaningful contribution to the region’s decarbonization goals, in line with the European Green Deal," adds Martijn Fock, Business Development and Commercial Director at HES International.

Studies (e.g. by the Öko-Institut and Agora Energiewende) confirm that CCS will be a key technology in enabling Germany to reduce its emissions from industry and agriculture. Wintershall Dea therefore plans to decrease emissions by applying CCS and low-carbon hydrogen technologies, potentially building up a business abating 20 to 30 million tonnes of CO₂ per year by 2040.

CO₂nnectNow is planned to become a crucial building block for achieving these goals if from 2028 onwards more than 10 million tonnes of CO₂ are gradually exported annually from Wilhelmshaven to safe offshore deposits.

You can also find more information about BlueHyNow here: Wintershall Dea is helping to shape the Energyhub Wilhelmshaven.

For further Information about our partnership with Equinor and the planned CO₂-Pipeline: Wintershall Dea and Equinor partner up for large-scale CCS value chain in the North Sea | Wintershall Dea AG

Wintershall Dea is Europe’s leading independent natural gas and oil company with more than 120 years of experience as an operator and project partner along the entire E&P value chain. The company with German roots and headquarters in Kassel and Hamburg explores for and produces gas and oil in 13 countries worldwide in an efficient and responsible manner. With activities in Europe, Russia, Latin America and the MENA region (Middle East & North Africa), Wintershall Dea has a global upstream portfolio and, with its participation in natural gas transport, is also active in the midstream business. More in our Annual Report.

As a European gas and oil company, we support the EU's 2050 carbon neutrality target. As our contribution we have set ourselves ambitious targets: We want to be net zero across our entire upstream operations – both operated and non-operated – by 2030. This includes Scope 1 (direct) and Scope 2 (indirect) greenhouse gas emissions on an equity share basis. Wintershall Dea will also bring its methane emissions intensity below 0.1 per cent by 2025 and maintain zero routine flaring of associated gas in its operations. In addition, we plan to reduce emissions resulting from the use of hydrocarbons by applying CCS and low-carbon hydrogen technologies, potentially building up a business abating 20-30 million tonnes of CO₂ per annum by 2040. You can find more about this in our Sustainability Report.

Wintershall Dea was formed from the merger of Wintershall Holding GmbH and DEA Deutsche Erdoel AG, in 2019. Today, the company employs around 2,500 people worldwide from almost 60 nations.

HES Wilhelmshaven Tank Terminal is Germany’s largest independent liquid bulk terminal, located at Germany’s single deepest draft port. The strategically located terminal is an important switch in the continuous delivery of essential building blocks for our everyday life needed to develop, sustain and improve the world around us. Our professional staff ensure that bulk products are safely stored, handled and processed 24/7 for customers from all corners of the globe.

The terminal offers 1.3 million cbm capacity for a wide range of liquid bulk products. In 2020, a LSFO production unit was taken into operation to add the production of more environmentally friendly LSFO to its service proposition to the oil & gas industry. The flexible and safe infrastructure accommodates extensive seagoing, road and rail traffic. It offers excellent connections to the heart of Europe’s most important refining and chemical processing industries as well as some of Germany’s main consumption areas. HES Wilhelmshaven Tank Terminal has ample land and facilities available to accommodate safe and flexible storage solutions for energy transition related products and processes.

HES Wilhelmshaven Tank Terminal is a 100% company of HES International, which is headquartered in Rotterdam and has already been carefully handling bulk raw materials since 1908.